Charles, Jennie and Myrtle Knight and Orr, Lucy and Rozabelle 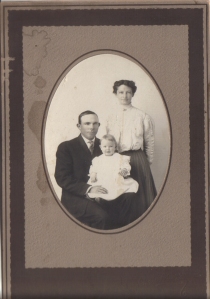 Photo taken by J.E. Orr, Walnut Sts, Rocky Ford, Colorado ( There are 2 women below with the last name ORR  that I found in the same box as this photo)

The younger woman says “Lucy Orr” and in pencil it says its given to  an Aunt but I cant make out that name other than it ends in Y.

From 1910 census info there was a Lucy Orr born around 1893 in Kansas. Her parents were James and Sarah Orr of Indiana. There was also a brother Clyde Orr. Lucy’s father may be the photographer, J.E. Orr

My mother did some further research and she may have married and is listed as Lucy Ellen Dunlap or Lucy O. Dunlap and died in Alameda, Ca around March 27, 1992

She is listed in the 1900 census as “Rozabells Orr” living in Rocky Ford, Otero, Colorado.  She could also be listed as

Please note some information and dates are conflicting, so may not be accurate, I just provide what clues I can to help narrow down the search.

Haven’t figured the connection yet as relatives for these 2 ladies, and perhaps with some more digging we can find out who in the Orr family had the photo studio. I’m also wondering if the Knights were related or if these were just photos from the studio jumbled together where I found them.

I found these about a month ago at a local swap meet. I was so excited! The family photo is in an old oval frame with beveled glass, hard to photograph without reflecting. I bartered with an old fella over it, came back at end of swap meet and it was still there, he knew nothing about who they were, he knocked off $5 from his price and the family went home with me. I got a lot of compliments on my way to the parking lot carrying them out. No names that Im aware of but the back is glued shut so hard to open it up without damaging them. Photo measures 13″ tall and 19″ across.

I also found this wedding photo with hand tinting. Someone took the time to professionally frame and matte it and it also has the protective glass for light. No names also but the price was super cheap! had to run to my car to put the wedding couple and the family up as my arms were full! This photo measures 19″ tall and 13″ across. Anyone have a guess on dating this one?

I am eager to get all of these hung, but with a broken wrist hanging photos is difficult, and I plan to change all my wall hangings around to showcase these. Someday right?

Sepia saturday post, I broke 2 wrist bones last sat and had surgery tues, so I had a plate and pins put in and now am housebound healing, but still managing to do this one handed, not too shabby eh?

“Offered is a lot of 14 antique photos from an estate” and they were shipped to me from Bloomfield, NY in May 2011

I was so sad not a last name, state or photographer listed. Didnt know how far I could go trying to trace these people.
But a challenge is always good right? Since the photos that are labeled by a photographer have Rochester, New York, the seller said they came out of an estate, and were shipped to me from New York, I had a starting point! Yay!

So we have these two boys featured in our photo with the clues to trace, I hopped on a family search site, typed in NY and the first names of parents to find any listed in old census records, first names of spouses was just enough to find me a few matches, then if you can find that, you next search through the household listed in the census.

It didnt take too long to find a match!

Edward M. Kennell and his wife Jennie Kennell are in the 1910 census living in Gates, Monroe, NY and have the following children, EARL L.(a match), Warren (another match), Florence, Edna, Norman and the mother in law Margaret Spruce. So now I have 2 names from the family line to work with.

It appears Edward the father of these boys died in January of 1915.  They resided at Brooks Ave, Gates

other photos in this group

2. We also have this cute little girl in the white dress

3. Solo portrait of the woman, scuffed up a little, perhaps the mother of the boy and girl in the following photo(similar facial features). Both of those photos were taken at the same studio “Smith-Curry Central Art Studio, Rochester, NY”

6. Blurred photo. Group of about 6 gentleman in suits and hats, building and old car in background.

7. There are 5 photos of the same child, no studio listed, 3 had holes punched and were tied together at one time to probably hang on the wall. The little girl doesnt look to happy to pose in any of the shots and in one she is without the coat and hood.