This weeks Sepia Saturday themes are Library and Sleep. Sleep came to mind as I acquired my first Post Mortem photo in this album and its Sleep at its Ultimate Rest. Photo will be seen later, keep reading.

I found these in a Phoenix, Az antique shop.

The green album looks to be done by Constance Dewilde. Even though her name is nowhere listed nor is she featured, this album has documentation next to all the photos and the writer says in one photo “Naomi is my mother” and that is how we narrowed it down as she was the only child. This looks almost as if it was a type of family tree album working its way down documenting the family, several photos are missing but there are still many left. Here is a brief run down of what was written in the album around the photos.

This album starts with Jane Boyce and Robert Pink living in Donaghadee, Ireland. They married and moved to America, first they lived in Chicago and then on a farm in Kossuth County, Iowa. They had 5 children. John, Jane, “Rob”, Ellen and Elizabeth. (Click on any of the images for a closer view)

Their daughter Jane married Henry Issac Hawley and lived on a farm in Kossuth County Iowa and later moved to Mason City. Henry was a brakeman and conductor for the Milwaukee Railroad. They had a child named Naomi Jane Hawley.(daughter in middle in photo below) 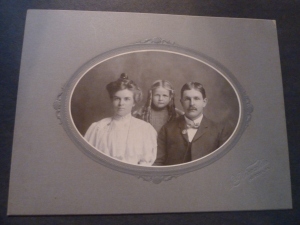 The other album is the Old White One in the Photo and inside the front cover it reads ” Henry Hawley and Jane Pink, December 24, 1896, A Christmas Present”

When I first purchased these I didnt even know they belonged to the same family, so that was even more exciting to discover when I got them home and began to study them.

This one is full of Cabinet Card and some CDV photos in the back. Also one Post Mortem photo.

The fantastic part about this one is that someone went along and wrote in pen detailed information as to almost who is featured in every single photo and their family relation. This is amazing to have for such an old album.

Due to the amount of documentation and names posted, I expect there will be some family contacts arising from this blog, will be curious to see what happens, since we have several family names and lines mentioned in these albums.

All that I can gather is that Constance had these albums, and she died having no children. She was born on February 11, 1927 and passed away on January 22, 2011. Her husband Ralph Height Jr. was an organist and was killed in a car accident in Iowa in 1965 at a young age and there is no info to indicate she remarried. So these may have been in her possession until her death and just ended up being sold or gotten rid of in her estate?

There are also some photos missing but details written on those pages also. People are listed as follows. (I have added a few photos at this time, the album is put up now but I at least got all the names listed here)

Lottie, Sadie, and Billie Lewis, Louisa and Will Lewis’s Kids

I believe this is my fathers sister Sarah Pink – Jane

14 responses to “Pink and Hawley, Ireland to Iowa – Sepia Saturday”