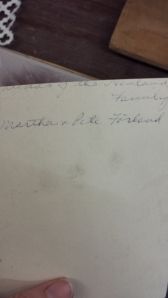 Sometimes I see photos in shops that are too expensive or are not for sale and are just used as decor or props. This is one such photo at a shop in Phoenix.

I realized, even if I cant afford a photo, it doesnt mean I cant take a photo of it! So I do not have the original but I can still pass along this photo of the Forlands. Because they may end up in another box, put into a collage, used as a tag, etc. Back reads “Martha and Pete Forland”

I found a little bit of info but not sure if its the same people when using genealogy search sites. There is a Martha and Pete that are siblings in the 1940 census in Delaware, Ohio. Says they are from Norway.

That is all I have to go on for now. But maybe someone will google and find them and be able to provide more info.

I was out antique store shopping today and came across this stack of large photos. They are fabulous and measure around 11 x 14 each.

They seem to be 1930s actor photos. Some have writing on them and some are signed. The person who these all went to appears to be Kendall Northrop. As they are signed to Kendall, but his full name is written on the back of one photo, woohoo! That makes it easier on me. And I did find a Kendall Northrop listed on Playbill, IMDB websites, hes listed as a male performer from around 1927-1931.

This photo is cute with the man and woman and her silly comedic arm/hand pose. It is signed by both actors and reads

“For Kendall, For my sentiments see paragraph two. From Billy Bradford” (excuse the clarity of my photos as my Scanner is out of reach at the moment so Im having to take pictures on my cell phone) 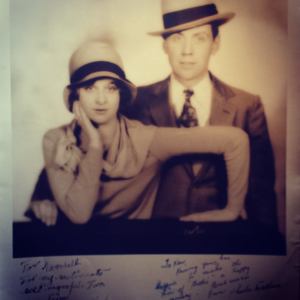 “To Ken, Knowing you has helped to make the run of “Billie” a happy memory. Best wishes from Phoebe Wallace”

This is all I have turned up so far for Phoebe, its on the playbill website and shows two plays she was in from 1928 to 1932….

This is another great one with the woman and dog that reads “Heaps of Success to Kendall from Brenda and Bebo” ? I cant make out the photographers name but it does say NY.

There are more photos to go through but not enough time so I will post these ones for now and add more as I get to them.